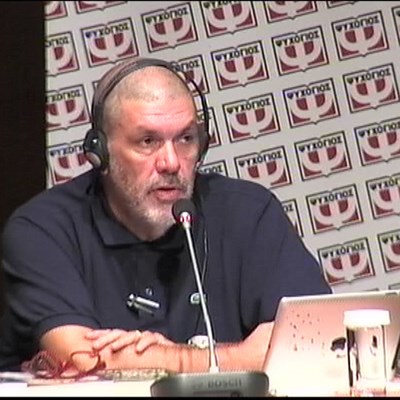 Thanasis Lalas studied at the Economics Department of the Law School of the Aristotle University of Thessaloniki, played football, met his fate early. At the age of 19, he created his first personal magazine with the title "Periodiko". He always loved to create working groups to which he owes a lot. At a very young age he had the opportunity to live next to Stratis Tsirkas, a great Greek writer, and to be guided in the field of poetry by Manolis Anagnostakis, Nikos Karouzos and Miltos Sachtouris. At the age of 23 he met Andy Warhol by chance and this meeting changed the course of his life. He began to interview and seek meetings with important Greek artists and scholars, he began to make these meetings his daily routine. To date, he has published 3500 interviews with unique personalities from all over the world. He has worked as a journalist in major Greek magazines and newspapers and has distinguished himself as a creator of new magazines, he has created 33 new concepts for magazines. In the 80s and 90s his radio broadcasts exceeded 70% in audience, which made him very popular in Greece. From time to time he appears on television in a number of celebrity shows. His last TV show on the state channel was called "The Dance of Answers".

He was born and raised in Athens. He was the Director and Editor-in-Chief of the largest circulating Greek newspaper "To Vima tis Kyriakis", he created the inserts "To Allo Vima", "Vima Donna" and "BIMAgazino" as well as the best selling youth magazine "FREE" as well as the free press "FAQ" magazine. He now runs the magazine Portrait Documentaries. In 2003, he was awarded the "Alekos Lidorikis" Journalism Award by the University of Athens, rewarding his ethos, his contribution as well as the innovation he introduced to the field of journalism.

Thanasis Lalas specializes in interviews and is known not only in his country but all over the world.