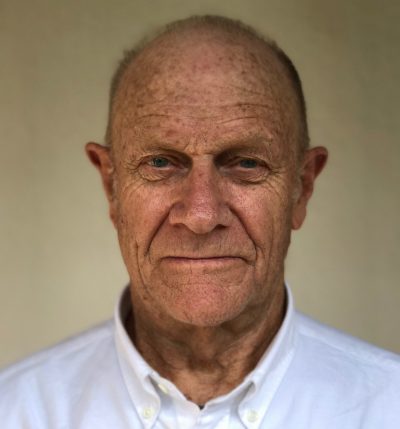 Michael Pearce has been working in Australia, the UK, Zimbabwe and Zambia for 42 years. His experience covers a wide range, from building in remote parts of Central Africa to converting old buildings in North-East England and large-scale city developments in Harare and Chinhoyi, Zimbabwe’, an ecological exhibition centre in Belgium and the CH2 council office block in Melbourne, Australia. Committed to appropriate ecological architecture, Michael Pearce has focused upon the development of buildings which have low maintenance, low capital and running costs and renewable energy systems of environmental control. The most recent work involves an approach to design in which the architecture expression is seen as a balance of the natural, the social and the economic environments in which the project is sited. He uses models from nature, copying natural processes which he studies through the new science of Biomimicry.
He was directly responsible for the design and supervision of Eastgate in Harare 1992 to 1996. This project has achieved world acclaim as a landmark building based on these principles. It was the largest commercial mixed development (31000m2) at that time, based on sustainable passive energy principles. It has performed as expected since it was occupied in April 1996.
In August 2001 he was invited to work in the City Projects Division of Melbourne City Council ( MCC) to become the Principle Design Architect for their new 12 000 sq meter offices in Little Collins Street called CH2. In this case he led the CH2 Design Team to produce Australia’s first Six Star ESD design and which has already achieved world status.

INFORMATION ABOUT MY APPROACH TO MY WORK
I have become increasingly interested in the development of a new relationship between the city and nature in which man’s relationship with nature is changing. This has a wide-ranging influence on my architecture. I am also convinced that the mindless burning of fossil fuels, which I call “burning diamonds”, is having a disastrous effect on the planet’s natural, social and economic environment. We should instead be using the vast resource of fossil remains for higher-state energy transfer processes to produce hydrocarbon materials like carbon fiber, while at the same time moving towards using the renewable energy which will give rise to a new solar age. Here in China I am interested in promoting an architecture which responds to the natural, social and economic environments inspired by the study of natural processes which has been called biomimicry. Above all this is an architecture more about process than pure form. Like all the objects we see in nature I am interested in the processes which brought them into being. It is all physiology.