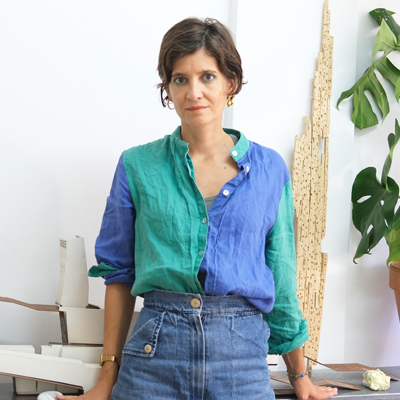 Lydia Xynogala is an architect and scholar working between Zürich, Athens and New Yοrk. Moving across formats and scales, her work gages architectural production in cultural narratives. Her practice produces buildings, interiors, objects, environments, texts and public spaces that engage with built artefacts and their material trails through history. Her current research focuses on the intersections of geochemistry, bodies and the built environment. Bypassing traditional dichotomies between the built and the natural, she focuses on their fuzzy togetherness.

She has presented and exhibited her work at MoMA, Van Alen Institute, Center for Architecture (AIANY), LMAKgallery, Storefront for Art and Architecture, gta exhibitions ETH Zurich, Instituto Svizzero, Onassis Stegi and at numerous international conferences. Recent texts have been published in journals such as Log, e-flux, gta papers, Manifest, A Public Space and at edited books by Rizzoli, Routledge and Kyklada Press.

Xynogala holds a Master in Architecture from Princeton University, a Bachelor in Architecture from The Cooper Union and a Bachelor of Science in Architecture from the Bartlett, UCL. She has taught at Columbia University, The Cooper Union, City College NY, Rensselaer Polytechnic Institute and ETH Zurich and coordinated workshops on in the US, Europe, and China. She is currently a doctoral fellow at the Institute for the History and Theory of Architecture (gta) of ETH Zurich where she writes about the making of a culture of care centered around natural resources in 20th cent. Greece. She has received fellowships in support of her work by the New Yοrk Foundation for the Arts and the Onassis Foundation where she was also a participant of The School of Infinite Rehearsals of Οnassis AiR. In 2020 she received the Greek Architecture Award for best built project by a young architect.