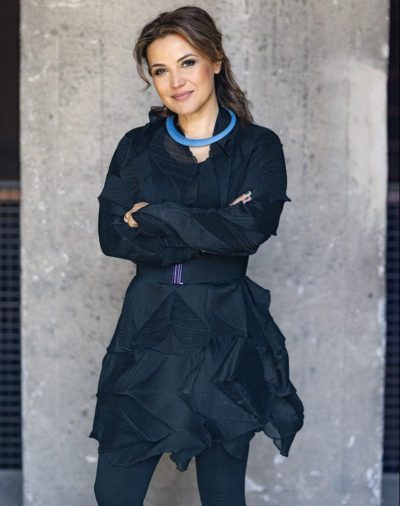 Lydia Kallipoliti is an architect, engineer, and scholar whose research focuses on the intersections of architecture, technology and environmental politics. She is an Associate Professor at the Cooper Union in New York. Previously, she taught at Rensselaer Polytechnic Institute, where she directed the Master of Science Program, at Syracuse University, Columbia University [GSAPP] and Pratt Institute; she was also a visiting fellow at the University of Queensland and a visiting professor at the University of Technology Sydney in Australia.

Her work has been published and exhibited widely including the Venice Biennial, the Istanbul Design Biennial, the Shenzhen Biennial, the Oslo Architecture Trienalle, the Onassis Cultural Center, the Lisbon Triennale, the Royal Academy of British Architects, the Storefront for Art and Architecture in New York and the London Design Museum.  She is the author of the awarded book The Architecture of Closed Worlds, Or, What is the Power of Shit (Lars Muller Publishers, 2018), the History of Ecological Design for Oxford English Encyclopedia of Environmental Science and the editor of EcoRedux, a special issue of Architectural Design magazine (AD, 2010). Kallipoliti holds a Diploma in Architecture and Engineering from the Aristotle University of Thessaloniki, Greece, a Master of Science [SMArchS] in design and building technology from MIT and a PhD in history and theory of architecture from Princeton University. She is the principal of ANAcycle thinktank, which has been named a leading innovator in sustainable design in Build’s 2019 and 2020 awards. Kallipoliti is Head Co-Curator of the upcoming Tallinn Architecture Biennale in 2022 with the theme “Edible, Or, The Architecture of Metabolism.”